A few days ago we visited the Iron Age Farm in Stavanger. I absolutely loved it. Between my two kids, and working as Field Trip Coordinator for each of their classes, I’ve been to many, many….many living history programs over the last several years and this was easily my favorite. The site is run by the University of Stavanger and is perched on a hill with good views all around. It’s the only place in Norway where they recreated a farm on an actual archeological site. The floor is the original floor, the fire pit is the original fire pit and so on. There were fences, a buriel mound and a few buildings, one currently being refurbished. We were able to go into a longhouse, and, with a small fire crackling in the pit, we sat on sheep and reindeer furs set on raised sleeping platforms. The dirt floor was hard and smooth from many, many years of use. The air was a little smoky and the longhouse was dark but there was light coming in through the chimney and the small doorways. The ‘Lady’ stood by the fire and told us of her life and the lives of others on the farm.

The farm was active during the Migration Period, which was approximately 350-550AD. The Norse Gods were very real to them. They weren’t something people “believed in”, they simply were. The men did the hunting and the protecting, of course, but the women held equal power. The Lady held the keys to the storehouse and she was responsible for ensuring that everyone on the farm was healthy and had enough to eat. If her husband tried to take her keys, she could divorce him. It was totally unacceptable. She would eventually be buried with her keys and he with his sword.

She gave us a sample of ‘hellekake’, a tasty flatbread made from barley they grew and cooked on hot stones by the fire. It used to take 8 hours a day to grind enough barley for everyone by hand on a large curved stone called a quern. Later, the grinding wheel was invented and this cut their time by half.

The farmers also raised sheep for wool and would travel for days to find the ingredients they needed to dye the wool every color, with blue being the most prized, as this was Odin’s color. It was very important to them to look their best and they took great pride in their clothes, hair and accessories. They used furs for warmth but they were also the currency of the period and were used for trading.

There were no trees in the area at that time, so they had to travel for wood for their houses, as well. They burned peat for fuel and needed to keep the fire going around the clock. To ensure this, the fire was tended by the most clever boy of around five years old, who was called Askeladden or Ashlad. He was a very important person on the farm and many Norwegian folk tales feature a boy of that name as the hero–a boy who beat the odds and usually ended up with the princess and half the kingdom.

As you can see in the photos, the doors to the longhouse are small. This served two purposes. One, to keep the heat in and the cold out. And two, to force any attackers to bend over to come inside. And, as the Lady happily told us, in this position, with their head down, anyone in the longhouse, woman or man, could easily chop off their heads. Gulp. As I told a friend, with the stone and sod roofs, the houses are cute but these were no Hobbits. These were the people who came before the Vikings. They were strong, proud and fierce.

Also on the site were remnants from the Stone Age (approx 1200BC) and the Bronze Age (1700-500BC). Unfortunately, during the World War II, the Nazis built a radio tower on top of the Bronze Age site, damaging it. Clearly this was a valuable location. The hilltop provided good views of any possible attackers. It had plenty of room for farming and grazing and was close to the sea for fishing. 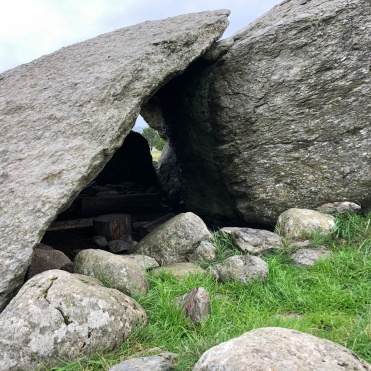 If you’re ever in this area I highly recommend visiting. With the price of your ticket ($12 adults, $5 kids) you can also go to the Arkeologisk Museum in Stavanger within 48 hours. They’ve done a beautiful job preserving and refurbishing the site so that it was easy to imagine what it was like to be there during that time.

One thought on “Iron Age Farm”